Home » A story about garlic 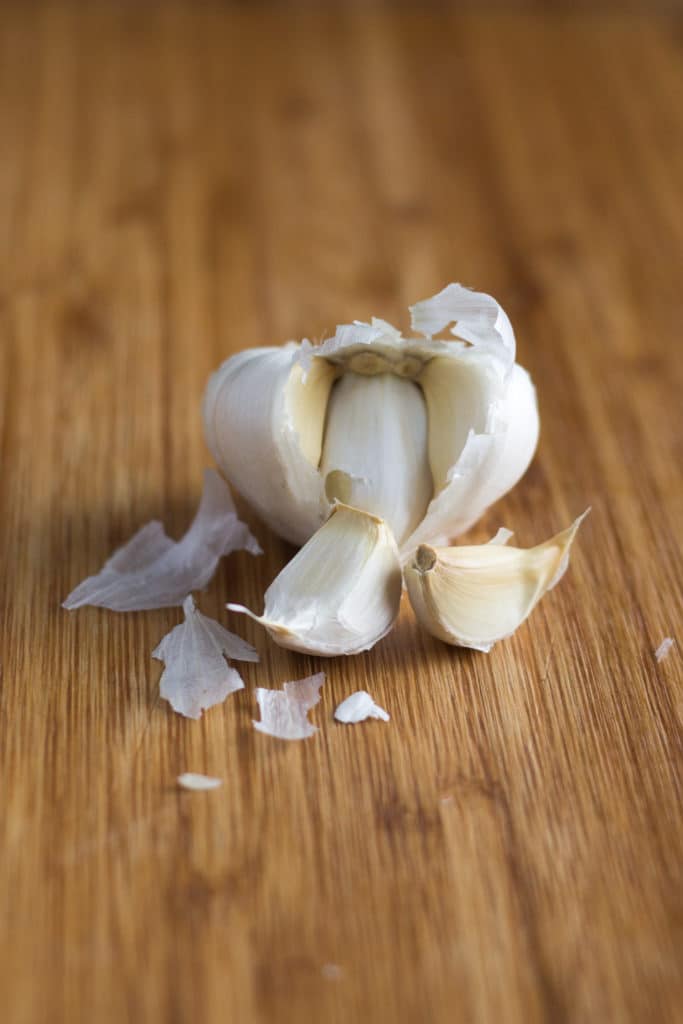 Who doesn’t love garlic? (Well, I mean… vampires, I guess. But I hardly ever invite them over for dinner so it’s cool.)

I’ve been a fan of garlic for pretty much as far back as I can remember – even as a kid. But during my formative years, my family didn’t really cook with ACTUAL garlic very often.

We consumed an abundance of the convenient processed packaged goods that were all the rage in the 1970s and 1980s. Kraft Mac & Cheese was our Wednesday night staple. Banquet brand chicken was one of my favorites – especially when in the form of the TV dinner that came with the mashed potatoes, corn and a weird undercooked brownie. I knew that Spaghetti-Os could be enhanced by adding sliced hot dogs to it. And I think I consumed more cans of La Choy chow mein before the age of 15 than most people have in a lifetime.

So it probably comes as no big surprise to find out that I grew up only knowing that garlic existed in the forms of garlic salt and garlic powder. I don’t remember ever seeing an actual bulb of garlic in person until well into young adulthood. And my first encounter with a real garlic was a hot mess. Here’s what happened:

I was 22 years old and had just landed my first real “big girl” job out of college. I worked in a tiny beige cubicle on the 28th floor of a shiny high-rise building in Downtown Minneapolis, where I got to do a bunch of really glamorous, grown-up things like joining conference calls, drinking coffee with coworkers, and using the copy machine. It was the big time, people. THE BIG TIME.

To fully round out the grown-up new life I had just parachuted into, I thought it would be a great idea to surprise my roommate with a fancy homemade dinner. So I flipped through a bunch of my favorite cookbooks and settled on the dish that would be sure to impress: shrimp scampi.  Delicious, buttery, garlicky shrimp scampi. And best of all, it didn’t even look that hard to make. Perfect.

I made my shopping list of ingredients and hit the local grocery store. The recipe called for all the usual stuff you’d use to make shrimp scampi – a pound of shrimp, a lot of butter, some parsley, a little white wine… and four cloves of garlic.

Except there was a problem. I didn’t know what a clove of garlic looked like.

I was able to locate the garlic in the produce section, thanks to the helpful signage identifying the oddly shaped objects as such.  I consulted my shopping list to confirm how many of these garlic things I needed: Four cloves of garlic.

A clove? What’s a clove?, I wondered. Each of these things here must be a clove, I reasoned. So I grabbed four of them — yes, four BULBS of garlic — and went home to make my shrimp scampi.

Thinking back, I don’t recall the exact process I used to peel apart those four bulbs of garlic, or how I chopped them before adding them to my shrimp scampi. I just remember that it was a cumbersome process that seemed to take FOREVER, and I do recall being really surprised and perplexed by all the weird tissue paper-y stuff I had to remove from the inside of each of these four “cloves.”

Dismantling and chopping four “cloves” of garlic seemed like so much work, I was cursing myself for thinking that shrimp scampi was going to be quick and easy to make, and I vowed to never do it again.

My tune changed a bit as the shrimp scampi started cooking, and the delicious aroma of garlic began to waft through our apartment. It smelled heavenly, and all because of my cooking! YES! Another grown-up Jen success!

But then the garlic scent got stronger. And stronger. It still smelled good (I mean, it IS garlic after all), but the smell was SO UNBELIEVABLY STRONG.

My roommate came home just in time for the shrimp scampi to be ready. She seemed happy with my choice of entree for the evening, but it was clear that she was concerned about the garlic smell that greeted her as soon as she got out of her car way down in our underground parking garage, which she soon discovered was obviously coming from our kitchen due to the scent growing increasingly stronger as she approached our apartment.

She tasted the shrimp scampi I served up for her, and with a tone that suggested she was trying not to make me feel like a total idiot, she asked me: Soooo… how much garlic is in this, anyway?

I responded: Not that much. Just four cloves, and pointed toward the counter, where there was a large pile of tissue paper-y remnants of the four bulbs of garlic I had been wrestling with all evening.

My roommate politely ate the rest of her dinner, and then informed me of the difference between four cloves of garlic and four bulbs of garlic. 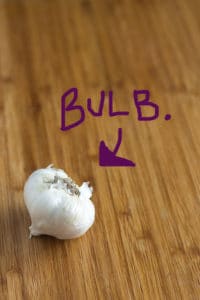 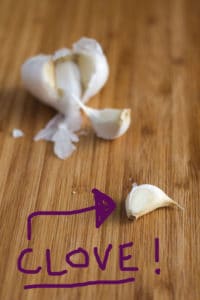 The moral of this story:

It’s okay to make mistakes when you’re learning new things about cooking. You might have to go to work for the next several days with the pungent aroma of garlic constantly lingering on your skin and clothes, but it’ll be okay. At least you’ve learned something, and your cooking skills will be better off in the long run.

And, yes, you’ll make more mistakes in the future. It just comes with the territory.